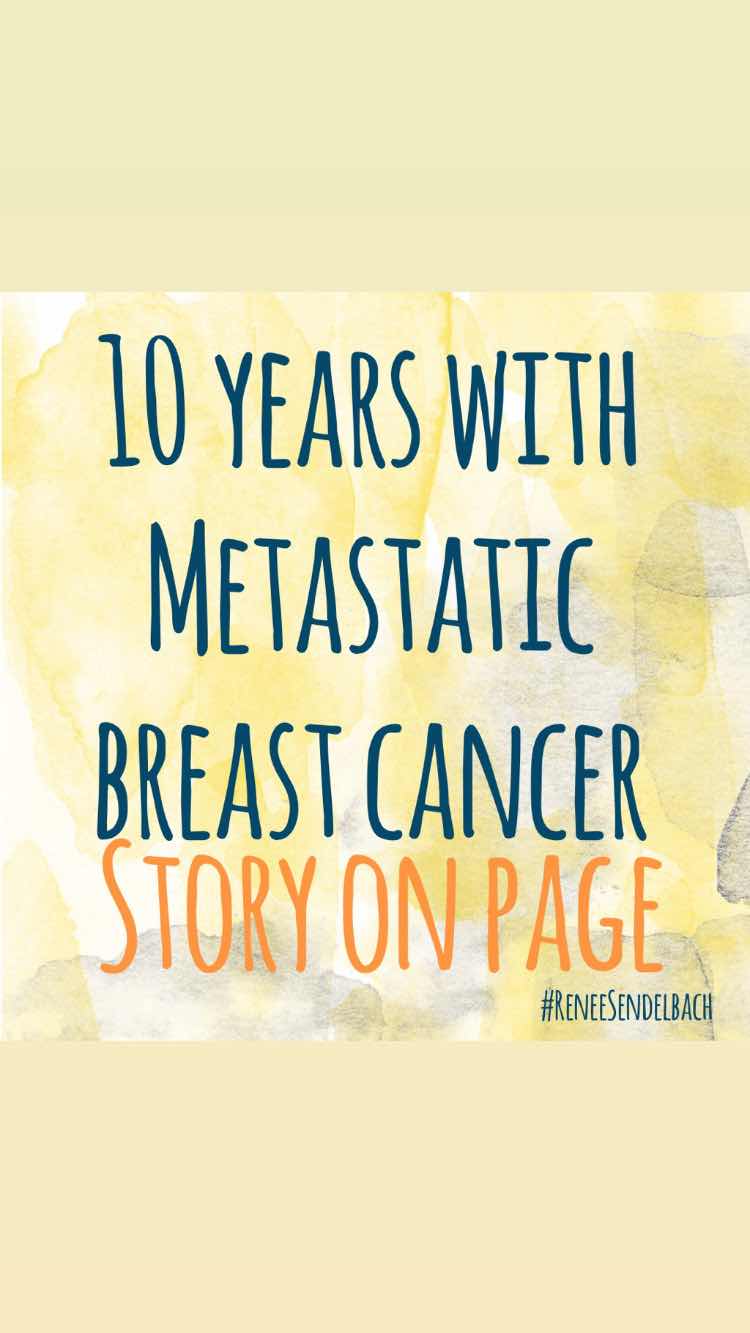 Today marks 10 years since I was told the stage 1 breast cancer had metastasized to stage 4 breast cancer (MBC)* a mere year and a half after finishing treatment for stage 1 Triple Negative breast cancer.

I will never forget the day Dr. H told us that the cancer was not only back but had grown and had taken up residence in my bones and lungs. I honestly had no idea that was even possible...not going to say no one told me that it was possible because I am sure that they did tell me this but I choose to not hear it.

So when I heard that the survival rate was around 3-4 years, I once again chose not to hear it (yes, I am fiercely stubborn).

The first line treatment was Abraxane and lasted 3 months until the cancer outsmarted the chemo and the tumor in my lungs started to grow more...a lot more.

Because the chemo wasn’t working, I was then put on carboplatin + gemzer + a trial PARP and 6 weeks later, the scans showed No Evidence of Disease (NED)!

I was in shock when Dr.H told me this and in even more in shock when she told I didn’t get to stop chemo. (YES... I honestly thought that when I heard NED, I would also hear “no more chemo” - I was wrong...way wrong.)

This is where it really set in that MBC was a whole different beast than lower stages and some kind of treatment was always going to be needed.

I stayed on that 3 part combo until my blood counts couldn’t recover even after multiple blood transfusions. After Dr.H worked it out with the trial, it was decided that I could stay on just the PARP to see how I did.

I continued to receive NED scans, gathered my strength back and was thinking life with MBC was no problem.

That was, until September, 2012 when I had a seizure while out shopping with my son...it was so scary to see the fear in his sweet eyes and me not knowing what was going on. After a quick call to Dr. H, we went to the hospital for an MRI when I was told that I had a mass growing in my brain.

I had brain surgery a few days later where the doctor found a sack of fluid and solid tumor “together” (still not 100% sure what that meant) about the size of a walnut.

Recovering from that surgery was difficult because of the steroids. I developed steroid psychosis and had to go to back to the hospital for a few days to get it straightened out. Thankfully I got it under control and was ready to continue on.

So not even 4 months after the first brain surgery I was going back in for a second brain surgery. This one again found the same type of triple negative breast cancer in my brain.

The second surgery left me without feeling in my right foot and a hand/arm thing...I hold my right forearm up to my chest vs down by my side.

I had to use a walker after that surgery until I could learn to trust that my leg was actually there and still worked since I couldn’t feel it.

I had to teach myself how to drive with both feet because I couldn’t/still can’t move my right foot to the break...me and my mom started with me driving in a church parking and slowly progressed. I still don’t like to drive because the mental energy it takes me...it exhausts me.

All was going good for 6 months until one day I was out shopping for my birthday and my right leg felt more numb and heavier than normal. I instantly knew something was up, so I called Dr. H and once again, an MRI confirmed something was up...the tumor was back in the exact same spot.

Back in for brain surgery #3 within 9 months.

When I woke up from the 3rd surgery, I looked at my husband and told him that it was all good...that I felt like the tumor was gone! And it was and has stayed gone since May, 2013!

I started the oral chemo Zometa. This chemo came with odd side effects...blisters/thick painful bottom of the feet, exhaustion and my finger prints peeled off. (I still can’t use the finger print scans for my devices.)

All was going good until June, 2016 when I was diagnosed with a secondary cancer of MDS (pre-leukemia). The best way to treat MDS was a bone marrow transplant to which I was so extremely lucky/fortunate/blessed (I don’t like to use that word  blessed because I think about all the others in this situation who it wasn’t like that for them...then I spiral wondering why was I blessed but not others). But “Be The Match” found a match for me in a few short months. This was huge because sometimes it takes years for a match to be found.

The bone marrow transplant was hands down the hardest thing I have ever gone through...4 straight days of heavy duty chemo, the transplant day, and around day 12 after transplant the hardcore side effects started and lasted about 8 weeks.

It took me a long time to feel good again, but it came!

I do still have graft vs host flairs from transplant, numb foot (yes, sometimes it still surprises me that I can’t feel my foot), sleep at least 10 hours a night, anxiety and depression, and other lasting baggage from those 10 years.

BUT here I am, LIVING 10 years metastatic and 4 years post transplant!

Hormone therapy lasted 4 years, now on oral chemo Xeloda. Feel no different since the start of this stage so guess so far so good. Mainly in my bones and a little bit in my liver and lungs.

Not sure I will manage 10 years but who knows.

Thanks for signing up!

Order your "Renee In Cancerland" BOOK!!

I'm a Stage IV breast cancer thriver, mommy, wife, and artist, learning to enjoy and appreciate life despite having a terminal disease. This is where I share my experiences and show you how to do the same.